This post is based on an email that was sent and in no way reflects the views and opinions of ''Met'' or Jamaicanmateyangroupie.com. To send in a story send your email to likeacopcar.78@gmail.com
August 31, 2014 8:46 am 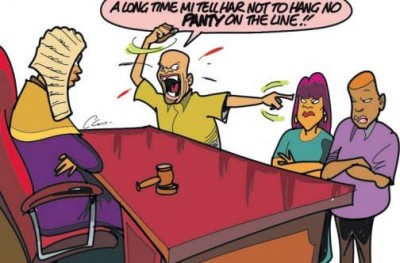 Drama in court over five panties
Covering the Courts

Drama in court over five panties

A common-law couple and their male neighbour who all got involved in a fight over five panties that were reportedly hung on a line over the neigbour’s door, brought high drama to the Corporate Area Resident Magistrate’s Court last week.

The couple, Horace Green and Ann Marie Barnett, and the accused man, Audley Ramsay, came to blows after Ramsay got upset when he saw the underwear hanging on the line over his door and cut down the entire clothes line, resulting in the panties and other items of clothing faling to the ground.

Barnett reportedly retaliated and used a machete to chop Ramsay’s bicycle tyres which caused a fight between the two men.

During the altercation, Ramsay was reportedly injured by a machete that Green had while Barnett used a baton to hit Ramsay, resulting in a wound.

The court further heard that Ramsay had punched Green in his back, causing an abrasion.

According to police reports, Green said Ramsay told him that he had warned his common-law wife on a number of occasions to refrain from hanging the panties on the line but she continued to pin them there.

“A long time mi tell har not to hang no panty on the line,” Green said Ramsay told him.

Furthermore, Barnett said Ramsay told her that she should only hang one panty on the line instead of five.

She however admitted to hitting Ramsey with a baton and was ordered to pay $2,000 or serve 30 days on a charge of unlawful wounding.

But Green, while admitting that he had damaged Ramsay’s bicycle, claimed he had not wounded Ramsay who in turn denied punching Green.

Green was subsequently fined $2,000 for malicious destruction of property and a trial date was then scheduled for September 24 when he and Ramsay are to be tried on charges of unlawful wounding and assault occasioning bodily harm, respectively.

Both accused men’s bails were extended.

Two teenagers faced the court for beating up a woman after she accused one of them of performing oral sex.

Aaron Brown and Andrew Murray, both 19 of Kingston addresses were arrested and charged with assault occasioning bodily harm.

According to police reports, on July 27 around 9:30 am the complainant was at her home conversing with Brown when she reportedly accused him of performing oral sex. Brown reportedly got upset and both ended up in a fight.

Murray, who is Brown’s friend, reportedly intervened in the dispute and used an object to hit the complainant across her head causing her to sustain bruises to her elbows and left knee.

However, both denied hitting the complainant when they appeared in court on Monday.

Murray, for his part, said, “I did not touch her at no time during the fight.”

Both accuseds’ bails were then extended for them to return to court for trial on September 29.

Thief gets 9 months for grabbing chain

A teenager, who was spotted by the police snatching a woman’s costume gold chain from around her neck in downtown Kingston, claimed he was influenced by his friends who labelled him a coward.

“Offica a phone me fix but me friend dem say me a coward so me a try a thing,” 18-year-old Sandrae McKenzie reportedly told the police when he was held.

On Thursday when the Luke Lane, downtown Kingston, resident appeared in court he pleaded guilty to simple larceny and was slapped with a nine-month prison sentence by Senior Magistrate Judith Pusey.

McKenzie grabbed the woman’s chain from behind while she was boarding a bus at the St Thomas bus terminus on Orange Street on August 21 about 4:45 pm.

McKenzie then tried to escape on foot but was held by the police.

However, when he was held, the chain was not in his possession and he told the police, “Offica me throw it give me friend but me know whey it deh.

He was then escorted to a stall on Luke Lane where the chain was recovered.

McKenzie, when cautioned, reportedly told the police, “Offica first me a try a thing.”

A teenager and his friend were told to spend the weekend in custody and think about how they were going to convince the magistrate on Monday to not send them to prison after they tried to play a trick on personnel at the Swallowfield Examination Depot which backfired on them.

Shane Brown, 24, tried to pass himself off as 18-year-old Shawn Berry in an effort to sit the oral and written test for the teen who wanted to get his driver’s licence.

Both men went to the depot on August 25 about 1:30 pm. Reports state that Berry was scheduled to do an exam but Brown went in his place and attempted to do the exam but was caught after personnel realised that he was not the person on the photograph.

“Clever!” RM Pusey exclaimed after the facts of the case were outlined.

She, however, told the men that they should stay with her until Monday when they will be sentenced.

“Think about how you are going to convince me,” she said to the men on Friday.

Both men are represented by attorney Stephen Powell.

Five prisoners were hauled before the court for beating another prisoner whom they accused of being a cow thief.

The prisoner in question was, however, in lock-up for smoking ganja and spent five days there when he was pounced upon by the group.

The men, Marlon Williams, 36, of Nesberry Road, Dave Clarke, 19, of White Lane, Davian Hartley, 20, and Marvin Small, 26, of Wellington Street and Rohan Moore, 19 of Denham Town, all in Kingston, are facing a charge of assault occasioning bodily harm.

The incident reportedly occurred at the Constant Spring police lock-up on August 17 around 9: 40 pm.

According to police reports, law enforcers who were on duty heard a loud singing on the cell block and went to tell the inmates to be quiet. However, when an officer went into the cell where the men were singing, one inmate was observed crying and when he was questioned told the police that he was being beaten by the men.

According to the complainant in his statement, the men started to beat him after they asked him if he could read and he told them that he could not and they threatened to kill him.

“Yuh a cow thief and we ago kill yuh and any jail yuh go we ago mek we chargi dem mash yuh up,” he said the men told him.

The complainant said that one of the inmates who was beating him said to him, “Hey bwoy yuh know me, a kill me kill people and mek duppy and sorry we neva ave a baton cause a kill we wud a kill yuh.”

The complainant also said that as the policemen approached, the men told him, “Yow, stop yuh noise and bet yuh nuh tell de police nutten, me ago see if yuh a gal.”

On Thursday when the case was mentioned, all the accused men with the exception of Moore, who was not brought before the court, pleaded not guilty and the case was set for next Tuesday.