This post is based on an email that was sent and in no way reflects the views and opinions of ''Met'' or Jamaicanmateyangroupie.com. To send in a story send your email to likeacopcar.78@gmail.com
November 2, 2014 9:07 am 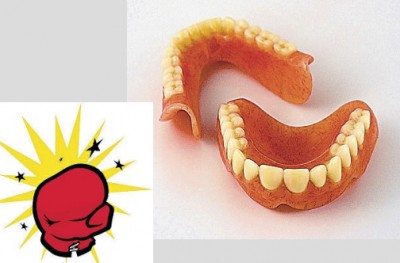 A 60-year-old man found himself facing the Corporate Area Resident Magistrate’s Court, accused of attacking another senior citizen and knocking out three of his teeth with a piece of wood over a plate of food at a wake.

Joshua Wright, a labourer of Sandy Park in St Andrew, was arrested and charged with assault occasioning bodily harm following the incident, which occurred at a premises along Barbican Road in St Andrew.

According to the 59-year-old complainant in his statement, about 3:30 am he was at the wake with friends when one of them gave him a plate of food. The complainant said that he was not ready to eat the food and covered it with another plate and rested it on top of a nearby counter.

The complainant said that he was in the process of getting up when Wright used a piece of wood to hit him in his mouth causing three teeth from the top row of his mouth to fall out.

On the first day when the matter was mentioned, Wright pleaded guilty to the charge and the complainant was instructed to return to court with the amount that it would cost to replace his teeth.

On Monday when he appeared in court, the complainant said that it would cost $8,000. Wright, responding with an American accent, told the court that he needed to call his children overseas to get the money.

“I wish I was as fortunate as you,” Senior Magistrate Judith Pusey remarked.

Wright then told the court that the food they were fighting over was in fact given to him and not the complainant.

“I was at the bar playing dominoes with three men and the food was being shared. Why he waited until it was shared to take it? he asked.

“I moved it from the left to the right to get it out of his path and he hit me in my head and then, out of reflex, I hit him with the piece of board,” Wright added.

The matter was subsequently rescheduled for Wright to return to court with the money on Wednesday.

“Is a mad man that, a tek him tek whey me food enuh,” the complainant said as he was exiting the court.

Wright then returned to court on Wednesday and paid $8,000 to the complainant and promised to pay the rest on Friday, which he did.

However, on Friday the complainant told the court that Wright was telling people in the community that he gave him $8,000.

The matter was however rescheduled for mention on November 12, as the presiding magistrate was absent.

Another man was also brought before the court for pouring hot water on his wife after she reportedly refused to fill some water bottles.

The accused, Carlton Bolton, a 56-year-old engineer, is accused of pouring a container of hot water on his wife causing burns to her face, chest and arm.

According to allegations, on September 15 the complainant, who recently suffered a stroke, was at home when her husband asked her to fill some bottles with water. The woman reportedly told her husband that she was sickly and could not manage it and told him to wait until the helper arrived.

But according to the complainant in her statement, her husband was not pleased. Moments later, she said that she saw him carrying some bottles from upstairs and she reminded him that the bottles belonged to her daughter and that he should give them to her, but he refused.

The complainant said that she later went upstairs and while she was there a feeling came over and she started singing religious songs and praying out loud.

Following that, she said that she was returning downstairs when she looked up and saw her husband throwing down a container of hot water on her.

The woman reported the matter and Bolton when cautioned reportedly told the police: “So now me a prisoner, aah bwoy.”

On Monday when the matter was mentioned, Bolton’s lawyer Pierre Rodgers told the court that the couple has been married for 22 years and asked for the matter to be referred to mediation.

Resident Magistrate Pusey then asked the complainant if this was the first time that she was abused by her husband and she said it was not the first time but nonetheless agreed to go to mediation.

“Mr Bolton, I need not tell you to stay your hand,” RM Pusey warned the accused.

“Yes, Your Honour, it should not have happened in the first place,” he replied.

“Should not have been happening,” the magistrate told him.

Bolton’s bail was then extended for him to return to court on November 20.

A conductor who reportedly attacked a woman and broke her hand in two places told the court that he was involved in a relationship with the woman, who claimed she is a stranger to him.

The accused man, Robert Wallace, of Newmarket in St Elizabeth, reportedly attacked the woman on East Street in downtown Kingston and hit her all over her body with a piece of wood, resulting in her suffering a broken hand and 13 stitches.

On Friday when the matter was mentioned Wallace told the court that he came to Kingston in search of a job and met the complainant who initiated a relationship with him. However, Wallace did not say how the attack took place.

“I am from St Elizabeth. I came to look work and me get a job as a driver and me see har and she ask me fi me number and I give her,”

“Me and her was in a relationship and me use to give her couple sex,” he said, sparking laughter in the court.

The matter was then stood down by Magistrate Lorna Shelly Williams for Wallace to make a bail application for himself.

When the matter resumed, Wallace told the court that he was not accustomed to this type of situation and had never harmed anyone before.

The complainant however told the court a different story and denied knowing Wallace.

“I don’t know anything about what he is saying. I was selling and he came and asked me how much for a toothbrush and when I told him he used indecent language and I said when you move you head and he started to hit me with a piece of board,” she said.

“I got her pregnant and she throw way de baby,” Wallace interjected.

Wallace however did explain his reason for attacking the woman in his report to the police but it differed from the story that he gave in court.

According to the police report, Wallace showed up at the station after the complainant reported the matter and told the police that he had hit a woman with a piece of wood and broke her hand after she came on his bus and held a knife to his neck.

He was then pointed out by the complainant, who was still inside the police station.

Wallace was subsequently arrested and charged with assault occasioning grievous bodily harm and when he was cautioned he reportedly told the police: “Offica me sorry fi lick har still, but a she come on pon me bus and put de knife a mi neck and suh me guh drop off all de passengers and go back fi har.”

Wallace was subsequently offered $60,000 bail on condition that he reports at the Newmarket Police Station three days per week. He is to return to court on December 1.

A man who stole a woman’s cellular phone from off a counter in a wholesale told the police that he was a Christian and had no need to steal a phone.

On Thursday when he appeared in court his lawyer Phoebe Lawrence said that his client was guilty and that his client did not wish to give any trouble. A sentencing date was scheduled for November 4.

The police said that on the day in question about 2:00 pm the complainant went inside a store at Silver Slipper Plaza in Cross Roads, St Andrew. The complainant, while purchasing something inside the store, placed her phone on the counter to remove the cash from her bag.

However, it was reported that when she was finished she looked and saw that her phone was missing and saw Murray hiding it under his shirt.

Murray reportedly left the store with a woman and was trailed by the complainant who met up with the woman and asked her for Murray.

The woman reportedly directed the complainant to a store where Murray went but Murray, when confronted, denied stealing the phone and the complainant reported the matter and he was arrested and charged.

Murray was later released on station bail and returned the stolen phone to the police.

According to the police, when he was cautioned he said: “I am a Christian I don’t need to take a phone.”