This post is based on an email that was sent and in no way reflects the views and opinions of ''Met'' or Jamaicanmateyangroupie.com. To send in a story send your email to likeacopcar.78@gmail.com
August 20, 2013 3:42 pm

WE SOON NUH HAVE WALKING SPACE 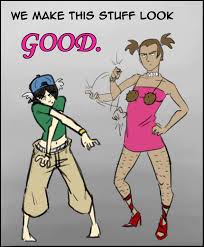 A group of cross-dressers created quite a stir inside a police station located in the St Andrew North Division on Emancipation Day, after prisoners who were held in custody mistook them for females, THE STAR understands.

Information reaching our news desk suggests the lawmen stood watch over the group of men until they were able to depart the station unharmed. The police were forced to adopt that stance out of fear for what might have transpired after residents gathered around the station yard as news of the men’s attire spread throughout the area.

Our news team gathered that in the end, the men were whisked away by an alleged taxi operator who was summoned to the station for a pickup.

A male resident told THE STAR, “Yow, mi couldn’t believe it especially ina di big big holiday (Emancipation Day) di … dem dress in skirt and lipstick with woman hairstyle and a talk up a bag a tings cause di police dem a stand guard. If di people dem did eva hold one a dem, about four a dem di car mussi broke down wid”

THE STAR was told the incident took place during the daytime and lasted for close to half an hour.

A female resident told THE STAR that the crowd that assembled at the station alerted her as to what was taking place.

When THE STAR contacted the police station, an officer who declined to be named told our news team that he was not on duty but he could shed some light on the matter.

THE STAR gathered that all hell broke loose when the prisoners in custody learned that the persons they were attracted to, thinking they were females, were in fact a group of men.

The police personnel said, “My understanding is that the ‘men’ were inside the station seated on the prisoners’ bench when they attracted some responses from the unsuspecting ‘straight’ men who were in custody. The men in custody thought those on the bench were actual females until they were told otherwise.”

The officer continued, “There was a commotion inside the station after the fact was revealed and then passers-by got wind of what was happening and joined in. The men were later released, they were not arrested and I am not certain why they were brought to the station in the first place.”