This post is based on an email that was sent and in no way reflects the views and opinions of ''Met'' or Jamaicanmateyangroupie.com. To send in a story send your email to likeacopcar.78@gmail.com
August 7, 2013 4:08 pm 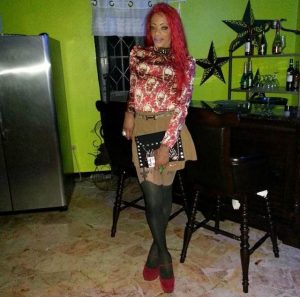 Last week, in Montego Bay, Jamaica, 16-year-old Dwayne Jones was shot and stabbed multiple times for turning up to a party in women’s clothing. Jones was reportedly transgender and the murder has once again highlighted the awful reality of life for Jamaica’s LGBT community. And it really is f**king awful.

In 2006, TIME magazine called Jamaica “the most homophobic place on Earth,” and the anti-gay sentiment prevalent in the country’s media and most popular musical genre, dancehall, has been well-documented. The Jamaica Gleaner, one of the country’s largest newspapers, regularly publishes stories about the gay community with a homophobic slant. Last month, it referred to a group of men who were evicted from an abandoned house as a “gay clan” and ran an op-ed (in the year 2013) that rubbished the idea of being born gay, saying people who are attracted to the same sex actively decide to do so, in much the same way that they decide to “eat snails (like the French)” or “like the taste of jackfruit.”

In the wake of Jones’ death, I got in touch with Tiana Miller, a transgender Jamaican, who hopes that her openness about her gender and sexuality will inspire others to display similar levels of bravery.

VICE: Hi Tiana. So, back to the start—at what age did you first realize that you were transgender?
Tiana Miller: It was at around age five when I first started thinking like a female. Then I gradually came to the realization that I felt more comfortable in a female skin. It was difficult. Because of the social norms of my country, I really felt as if I was doing something wrong.

Were your family and friends supportive?
Yes, they were, especially my dad.

That’s good. What about Jamaican society as a whole? Do you agree with the description of the country as, “the most homophobic place on Earth”?
Yes, I do. The challenges that we face are difficulties in surviving, as they relate to jobs, education, and housing. High school was OK for me because I hadn’t transformed yet, but it’s hard now education-wise because I would love to get a college degree, but can’t because they won’t allow me in college.

That’s awful. I’d imagine gay people in Jamaica are quite economically disadvantaged if they are unable to get a decent education or find work.
Yes, they are forced to be poor. The lucky ones are those who find rich partners and dedicate their lives to them.

There have been a few high-profile cases of police brutality towards gay people in Jamaica. Do you feel that the police give transgender people the protection they deserve?
No, they definitely don’t. Homeless transgenders are on the street, and the police—who should be their protectors—have literally run them down and chased them because of their lifestyle.

A police raid on a “gay clan” in their “gay haven” in Kingston.

Is homelessness a common problem for transgender people?
Yes, and they are homeless because they have difficulties in sourcing income to rent houses or locate safe houses to live in.

Have you been physically attacked due to your gender?
Yes, I have been attacked before. I ran, so I didn’t suffer much harm. But naturally this had a traumatising effect on me.

So I take it there are a lot of areas that are out of bounds for gay and transgender people.
Naturally there are. This applies to anywhere where there are slums.

Some of the homophobic attacks over there have been horrific. I remember hearing about a gay rights activist who was killed before people celebrated over his body. Doesn’t stuff like that make you fear for your safety?
Yes, it does. I put myself out there, but I’m still aware of how vicious these homophobic homosapiens are.

Are there many people who dare to be open about their sexuality?
The gay and transgender communities aren’t united, as people fear for their lives, so not many people actually identify themselves with the communities.

So do you consider yourself brave for being so open about your gender and sexuality?
Yes, I am brave. If I wish to see a change, I myself have to inspire it. I had to put myself out there and make myself seen so that people know that transgenders do exist and see that we are normal people trying to live our everyday lives like human beings. We need people like myself who are willing to challenge this country and its government.

The media often hold dancehall culture responsible for the homophobia in Jamaica—what’s your view on that?
I think the main contribution comes from the church and their social ethics concerning what is right and wrong. It puzzles me how cruel human beings can be and how biased they are because the church claims that we are demons and bashes us instead of trying to counsel us.

Yeah, it seems a little illogical.
I know, right? But, like, seriously—I care zero.

So I take it there isn’t much of an LGBT nightlife scene where you are?
Well, there was, but there’s nothing now—just regular venues that they rent to us.

Do you think Jamaica will ever get round to changing its anti-sodomy laws and modernizing its stance on homosexuality?
Well, it actually seems to be on the verge of doing this.

Because gay culture is growing or because of pressure from other countries?
Both. But time will tell, and I don’t wish to make predictions.

Where do you see yourself in that battle?
I see myself as being the first transgender to be an ambassador for the country. I want to advocate for human rights, be a feminist choreographer and also be a whole lot of other things.