This post is based on an email that was sent and in no way reflects the views and opinions of ''Met'' or Jamaicanmateyangroupie.com. To send in a story send your email to likeacopcar.78@gmail.com
June 11, 2014 8:04 am 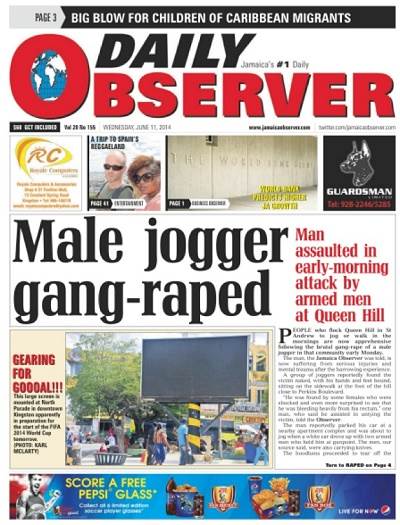 PEOPLE who flock Queen Hill in St Andrew to jog or walk in the mornings are now apprehensive following the brutal gang-rape of a male jogger in that community early Monday.
The man, the Jamaica Observer was told, is now suffering from serious injuries and mental trauma after the harrowing experience.
A group of joggers reportedly found the victim naked, with his hands and feet bound, sitting on the sidewalk at the foot of the hill close to Perkins Boulevard.
“He was found by some females who were shocked and even more surprised to see that he was bleeding heavily from his rectum,” one man, who said he assisted in untying the victim, told the Observer.
The man reportedly parked his car at a nearby apartment complex and was about to jog when a white car drove up with two armed men who held him at gunpoint. The men, our source said, were also carrying knives.
The hoodlums proceeded to tear off the jogger’s clothes and took turns at buggering him.
“The man was so torn up and ashamed. He had to retrieve his torn clothes in order to get his car keys and someone lent him clothes so he could avoid further embarrassment,” a jogger said.
The incident has driven fear into the people who exercise on that section of the hill daily.
“Several persons have told me that they were in fear and are apprehensive to go back because of what happened. It was not a pretty sight,” the jogger said.
“We used to protect the females and tell them to walk in groups, but it now seems we, the males, are the target. This cannot be allowed to continue,” the man said.
The man said the joggers tried to contact the police but were unsuccessful.
“We called the Duhaney Park and Constant Spring police, but we got no response. I am not sure if he reported the incident,” the man said.
Yesterday, police from the St Andrew South Division said they received no report of the incident. However, it was confirmed by a member of the Queen Hill community, who said the men drove a white car and were armed with a gun and a knife.
“There is a suspicious-looking white car that is parked in the community in the mornings and evenings. Nobody knows the men, but a lot of people come up here so we can’t be sure who is who,” the resident said.