This post is based on an email that was sent and in no way reflects the views and opinions of ''Met'' or Jamaicanmateyangroupie.com. To send in a story send your email to likeacopcar.78@gmail.com
November 16, 2016 7:48 am 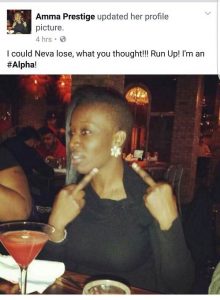 Joker wasn’t taken from anyone so I never took anyone man and if two people are engaged, they can do whatever they choose too at home. Joker never use me. He would spend money too cause when I figured him out, I’d hide my money and throw it into my other account that he wouldn’t see whenever he search my phone as I slept. Right now I’m sitting on almost 30gs to add to the 40 I already put down on my house (that he didn’t even know about) so who’s minding who cause I’m not a millionaire and I have kids to support. Stay there and listen to that pathological liar and you will get led astray. It’s so comical cause I could sink joker to make him kill himself as he planned years ago cause although I was successfully able to remove the world star thing, I was able to find an embedded copy online which I have on my phone so Joker, it’s not gone like you thought

. Nothing you guys put up is changing nothing for me over here hence why I will laugh with you. Many of you are in your housing typing with the roaches or mices around you waiting for typing time while I’m here making my moves. None of you guys are as bad as you think cause you cannot step to me no day!!! Yes, I have things to lose unlike you and have very good people in my corner who won’t make me lift a hand cause they know how hard I worked to get here. You guys should channel all your hate for me into something progressive cause I guarantee you, you will then amount to something so your kids can be proud. As for Lloyd Hastings, you know I never did you nothing, just like the ex before me who you made lose everything…mark my words YOU WILL NOT WIN THIS. If there is a God above, you will reap what you sow. Don’t feel sorry for me please cause I still get up everyday and walk into my office and get shit done like a boss!!! You’re all lucky! Don’t reply here, see me when you see me!

That’s all I will say on this issue because one thing I believe in strongly is Father God and Karma and this too shall pass….