This post is based on an email that was sent and in no way reflects the views and opinions of ''Met'' or Jamaicanmateyangroupie.com. To send in a story send your email to likeacopcar.78@gmail.com
July 22, 2016 7:54 am

Look pon DVS. Brixton boy mi grow with him. Been to his house i can’t be live seh him would dodis. him bad fi gyal only i know seh him doit cause him is a wicked nasty bwoy. Him used to live up herne hill in one tallblock him mus muv cause him mek money.. Dvs a evil him get Rob 2012 fi him chain licence by north man. 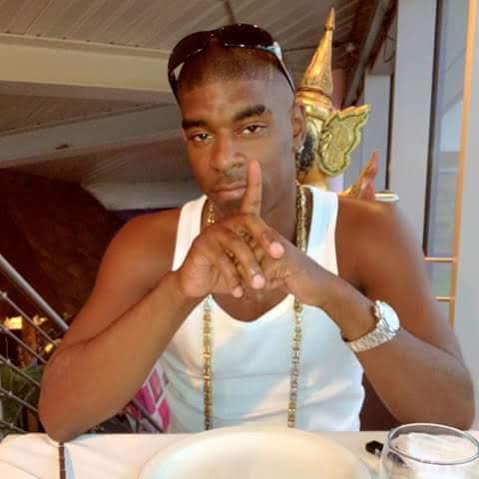 He raped a girl and she was left with a fractured eye socket that caused one eyeball to be at a different level to the other during the sustained attack, Snaresbrook Crown Court heard.

She had a wound on her chest where she was flogged with cables and leads, a burn mark on chest, one to her leg and two or three burns to other parts of her body caused by the hot iron on being held on her.

The woman had a stab wound to the hand, internal bleeding from being kicked and punched in abdomen and from where Hutchinson pushed a chair leg into her stomach.

She had large chunks of hair pulled out and one of her arms dislocated. Following the brutal, prolonged abuse her face was so swollen she was unrecognisable.

She had met Hutchinson, a DJ that goes by the name ‘DVS’, when she was only 17. On the way to meet him on February 5 they had an argument in which he threatened her, saying she ‘wouldn’t be speaking to him like that when she saw him.’

As soon as she walked through the door Hutchinson was in her face shouting ‘what are you saying now?’ ‘The next thing she remembers is being on the floor and the defendant hitting, punching and kicking her,’ said Claire Harden-Frost prosecuting.‘He took her iPhone, removed the sim card and smashed it.’

After the beating Hutchinson raped her.

‘She wanted to leave the flat but was too scared to because of what he had already done earlier that evening,’ said Ms Harden-Frost.

‘The next day it worsened still,’ said Ms Harden-Frost.

He punched her in the face and as she cowered in a corner forced a chair leg into her.

‘He dragged her around the house by her looking for a belt to attack her with,’ said Ms Harden-Frost.

‘When he couldn’t find one he used a phone charger and whipped her with the lead.’

When the lead detached from the plug her turned iron on the iron.

While it was heating up he became impatient so continued his brutal assault by whipping her with a television lead.

Once the iron was hot he jabbed it at her forcing her to the floor and began burning her as she lay on the ground.

‘She remembers being on the floor as he held the iron above her face begging him to stop,’ said Ms Harden-Frost.

‘He did but he told her to hold the iron to her own skin.

‘She couldn’t do it so he told her to slap herself instead.

‘She did so but it wasn’t hard enough for his liking so he punched her in the face.’

Hutchinson continued to call her names and ridicule her by throwing biscuits at her and making her sweep up the crumbs and forcing her to walk around the house.

Ms Harden-Frost said: ‘The defendant told her that she needed to be punished.’

‘He asked her to come up with strategies to punish her.’

When the woman suggested it was better that she reflect internally on what she had done Hutchinson told her to put her hands behind her back and punched her in the face.

‘He told her to lift her head up so he could punch her in the throat which he did, said Ms Harden-Frost.

‘He told her whilst she was in bed that she was going to die and that she wouldn’t see tomorrow and he lay there counting the hours she had left.’

‘She can’t remember all the details but she does know they had sexual intercourse again that night.

‘She said to him if it would make him feel better that he could do it.

‘He kept pressing on her legs which was painful from where she had been burnt.

‘She says she didn’t want to do it but she felt a need to try and survive.

‘The next day, the Sunday, he asked her whether she felt happy to still be alive.’

That day he continued the abuse ripping out her hair and punching her in the face.

By this time her face was so swollen she couldn’t see out of one of her eyes.

He then made a video on his phone of her sat on the floor with her legs open.

He made her say things about how she was a bad person.

‘She held the door shut and deleted the video.’

‘In desperation she called the police and tried to tell them where she was but she didn’t want the defendant to hear so she had to whisper the address. ‘

The woman managed to text a friend and told them to call the police.

‘The defendant was shouting that she would not be able to escape,’ said Ms Harden-Frost.

‘She then cleared the call list and deleted her text so that the defendant wouldn’t see.’

Hutchinson got out the room and when the phone rang it was a friend of the woman asking if she was okay.

‘He made her call her friend and get him to repeat the message back to her so now he knew that had asked him to call the police and given him the address,’ said Ms Harden-Frost.

‘As soon as she put the phone down the defendant grabbed her hair and punched her in the face and in the nose.

‘The police called back and the defendant told her to say everything was fine and that the kids had called the police by accident.

‘By this time the defendant was furious.

‘He told her they were going to go into the shower.

‘She begged him to put it on a cold setting but he told her no and to turn it up.’

After the shower he made another video of her saying what a bad person she was.

A short while later she realised that the bedroom door was broken and that if she removed the pin he would be stuck on one side and she on the other.

Ms Harden-Frost said: ‘He saw her going for the door and told her not to do it.

‘She grabbed her bag and ran.

‘She closed the door to the bedroom and pulled out the pin.

‘She then unbolted the front door and ran down the stairs. She was naked.

‘She heard him manage to get through the bedroom door and she ran out of the flats naked.

‘She could hear the defendant behind her saying ‘I have got you now.’

Luckily there was a member of the public nearby and he took he to a security office and the police were called.

It was about 11pm on the Sunday night.

The woman was taken to Royal London Hospital in Whitechapel.

She initially did not name her attacker.

Police traced her car to the underground car park and security staff directed them to the flat but it was empty.

On February 10 the woman gave them the name of her attacker and Hutchinson was arrested.

Hutchinson is said to go under the street name ‘DVS’ or ‘Devious’ and is a member of the notorious Poverty Driven Child-ren gang (PDC), which is based in Brixton.

He was tried and acquitted of the murder of James Smartt-Ford, 16, at the Old Bailey in 2009.
The teenager was shot twice at a disco at Streatham Ice Rink in south London on February 3, 2007.

He will be sentenced at Snaresbrook Crown Court on September 15.