This post is based on an email that was sent and in no way reflects the views and opinions of ''Met'' or Jamaicanmateyangroupie.com. To send in a story send your email to likeacopcar.78@gmail.com
September 8, 2014 6:00 am

WHAT IS TRUTH- GOOD MORNING 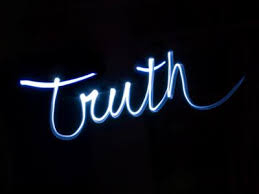 You can not handle the truth! Which suggest, one not being able to handle that which is supposedly, genuine or indisputable.

The entire thought of this statement made me question myself, by asking the question, what is truth? The response became a research project for me, and the writing of this article.

What is truth? Well the origin or etymology of the word truth began its roots in the word true, which is defined as being faithful, steadfast, firm in accordance with the facts or what is real. Therefore on that bases truth is the quality or state of being true.

So, if I said I love my wife, coupled with the fact that I do a lot of nice things for her; according to the above definitions of truth I am in essence speaking truth. As a result truth is the consistency of what I say corresponding with what I do, really?

Let’s put a pin in the information thus far, as we ascertain the opposite to truth. The contrary to truth would be a lie, now a lie is defined as a statement that a person is making that is untrue, in essence suggesting that one’s statement does not correlate with facts or that which is real/true. A second meaning states that a lie is something or someone that deceives.

Now, this is where the conflict comes about with the world’s definition with truth, as you would recall the second definition of a lie, is something or someone that deceives, but what does deceive me? Well guess what? To deceive means to make someone believe something that is not true, or to trick, mislead or dupe them. The word deceives got its origin from the Latin word “decipere” which literally means to ensnare or cheat.

So back to my previous example, I said I love my wife and I am doing quite a bit of nice things for her which consequently equate to my words equaling my actions. Except, she has no idea that I have several affairs, and a few outside kids that she has absolutely no knowledge of. The question now is, according to the world’s view of truth outside of the second piece of information that I have added about my wife and I relationship, was I being truthful with my wife even thou seemingly my words matched my actions according to her knowledge???????????

As with all things and so call facts, it is incumbent upon us to always consult with the manual of life to decipher what is reality and what is fiction. So we’ll look at a few scripture to begin the process of exposing what the world’s view of truth is.

Folks! I hope you’re ready for this, truth according to the manual of life which is the bible, is clear, and that is truth is: “A PERSON” yes you’ve read correctly truth is a person, and if this person is not revealing truth to you, then I strongly suggest you revisit what you have concluded as truth.

To prove this revelation of truth let us look at (John 16: 13), in this passage Jesus is speaking, and here is what he has to say, “However when HE the Spirit of truth is come, He will guide you into all truth: for He shall not speak of himself; but whatsoever he shall hear, that shall he speak: and he will show you things to come”.

I have capitalize the word “HE” to highlight the emphasis made by Jesus on recognizing the spirit of truth as the male gender, not only did Jesus distinguished him as a male Spirit in the person of truth, but his responsibility being, guiding us into, not some but all truth.

What I’ve discovered to be so amazing about The Spirit of truth, is that he can not speak truth of himself but only what he hears, of which the Father says he can speak, and apart of that truth is to show those that are open to him things to come or future events (I hope you are listening prophets and prophetess).

Secondly, This Spirit in the person of truth, motives are always designed to glorify God; according to (John 16: 14) which states, “For he receives from God and shows what he has received unto us”. This is why no weapon that has been formed against you can prosper, because the spirit of truth is continuously attempting to show you things to come concerning what is for you or against you.

Have you ever experience an incident where you met someone for the first time, and when you left their presence you said to yourself, “my spirit don’t take to that person” well this is just one of many occurrences where the spirit of truth is trying to guide and direct you into all truth about someone or something.

What is so enlightening is you did not say your feet, hand, arm or any other body part, did not take to this person, but your spirit, because God reveals information and things by his spirit to our spirit. The Spirit searches all things, yea, the deep things of God in an attempt to reveal truth to his people (1Corint 2: 10)

The question now is, how do I get the truth? Well the bible said that God’s word is truth (John 17: 17) Jesus said, the words that he speak they are spirit and they are life (John 6: 63). Therefore One must tie this in with (John 8: 32) which states that, and you shall know the truth and the truth shall make you free.

The bottom line is whenever you want truth from your spouse, children, friends, and relationships, or what deception is going on behind your back at work, pray and ask God for his Spirit in the person of the Spirit of truth to guide you and unveil truth to you. You have tried treats, raising your voice, stop speaking, and the all too common one, becoming physical all in a fail attempt to obtain truth, when it was really the Spirit of truth you needed to consult with to truly satisfy your desire for genuine truth. Again before you confront the person/s with anger consult God with humility for truth.