This post is based on an email that was sent and in no way reflects the views and opinions of ''Met'' or Jamaicanmateyangroupie.com. To send in a story send your email to likeacopcar.78@gmail.com
December 24, 2014 6:00 am

UNDERSTANDING THE SPIRITUAL IMPLICATIONS OF A DEMONIC ALTER 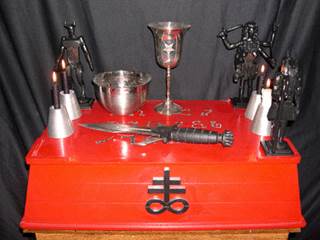 Understanding the spiritual implications of demonic altars-series
In the world of witchcraft covenants are made at demonic altars. Demonic altars are special covert
places erected by witches and warlocks to summons demonic entities to do their bidding, but more importantly to covertly covenant that person and by extension their family to that demonic altar.

The power of a demonic altar is created via the spilling of blood at that altar. It will always be the blood sacrifice performed on that altar that will summons evil spirits to oppress others spiritually. Unfortunately, from a Christian perspective very few Christians understands the spiritual implications of an altar. In fact if you were to ask them what is the significance of an altar, they would probably say, an altar is a place where one prays! While this maybe true to a certain extent altar carry a far great spiritual implication in the realm of the spirit.

Many of you reading this post right now, have zero idea that you maybe spiritually in covenant to a demonic altar. Unknowing to you, you were spiritually tied to a demonic family altar when your fore parents or some family member or even yourself decided to make the foolish mistake of participating in the works of witchcraft. What your family member or fore parents or yourself did not know was that the day you made the decision to participate in the world of witchcraft an evil covenant was simultaneously forged unknowingly to the participants that spiritually tied themselves and their family members not only to that demonic altar but also to a life of oppression and strange negative circumstances.

Let me provide some biblical proof to unveil the mystery of demonic altars. Scripture says to us in Judges 6, that the children of Israel were under serious oppression for seven years by their enemies the Midianites. At this point, the nation of Israel could not understand why or what was the reason of their oppression and why would God allow them to be oppressed in the promise land that he gave them. Scripture goes on to say that they cried out to God. God in turn sent an Angel who later instructed Gideon to pay a visit to his Father’s house which would reveal to Gideon the root or source as to why they were being afflicted and for so many years.

The bible says that when Gideon arrived at his Father’s house, unknowing to the children of Israel, Gideon’s father had a demonic altar set up in his home it was an altar of Baal. It was because of this altar that Gideon’s father had erected secretly in his home making sacrifices unto demonic deities and as a result the entire nation of Israel was cursed as a result of the evil that ONE MAN WAS DOING!

I have met with many people who have asked me to pray with them, pray for them, fast with them etc and as a result absolutely nothing happened. However, we would have discovered later that absolutely nothing happened even though we fasted and prayed, simply because that person was initiated and was in covenant with a family demonic altar, unknowing to them of course. That’s right! You see my friend covenants are respected by God and before God can do anything for you that evil covenant MUST BE BROKEN! In Gideon’s case it was only when Gideon destroyed his father’s altar and erected an altar unto God and began to make Godly sacrifices unto God, then and only then the spiritual order changed that paved the way for Gideon and the children of Israel to begin to progress and subdue their enemies…

I can literally write volumes of books in regards to this mystery. This understanding is basically a foreign language to the average church simply because they DO NOT UNDERSTAND THE POWER AND SPIRITUAL COVENANTS OF ALTARS!

Let me say to you right now, if you have been a Christian for any number of years and you were paying your tithes and you are either still broke or for some reason or the other you can not maintain money, then chances are you are spiritually tied to a family altar. This is how it works, whatever it is that the witchcraft practitioner asked you to bring to the altar to sacrifice and monies were exchanges to “pay the spirits to do your bidding”, well unknowing to you or whoever has participated in this evil has covenant with that altar unknowingly and as a result everyone in that family will have a money problem until the covenant with that altar has been destroyed. It is the same if a family member or yourself visited the witch doctor to have the witch doctor bring about separation in someone’s marriage or relationship so that you can be with that person, well my friend that altar now controls the destiny of all relationships in that family simply because a covenant was covertly established between the person who desires the evil to be done and the altar.

Therefore, it is vital for me in my Ministry to ask questions that may seem irrelevant to the one seeking help but to myself I am always in search of the spiritual root that has that person going backwards in life. In 7 out of 10 cases it is discovered that either that person, their parents, grand parents, husband, wife or some family member were or currently is involved with witchcraft and as a result that person unknowingly was spiritually tied to the altar. I know many of you are reading such information for the first time and I am sure this same mystery has been the source of your relentless issues. You must ask God to not only reveal to you if the source of your problems are as a result of altars in your life that you are or may not be aware of but more importantly you must ask God to destroy the spiritual covenants that has held you to that particular demonic altar. Please note! Whoever is in covenant with that demonic altar, knowingly or unknowingly, is ultimately controlled by that altar.

There is so much more I would like to release concerning demonic altars, but I will end here for now and will continue tomorrow in a series of writings on “Understanding the spiritual implications of demonic altars”.

Written By: Kevin L A Ewing
kevinewing@coralwave.com
kevinlaewing,blogspot.com
Posted by Kevin Ewing at 10:15 PM Links to this post
Email ThisBlogThis!Share to TwitterShare to FacebookShare to Pinterest