This post is based on an email that was sent and in no way reflects the views and opinions of ''Met'' or Jamaicanmateyangroupie.com. To send in a story send your email to likeacopcar.78@gmail.com
September 12, 2014 6:00 am 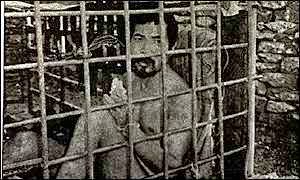 Spiritual Embargo part 2
In an effort to further explore the understanding of a spiritual embargo, I have decided to reveal some common signs in a person’s life or their business that would be considered clear signs of this spiritual embargo that they’ve found themselves in.
In spiritual Embargo part 1, I used as an illustration to explain a physical embargo, Cuba and America. As you may or may not know America has placed an embargo on Cuba and as a result Cuba can not engage in any trade or commerce with America, which as far as their proximity is concern America would have been their greatest trading and consuming partner in regards to goods and services. The results of the restrictions imposed upon Cuba by America has not only stagnate their economy and way of life but more importantly Cuba, due to it’s stagnant state has made them almost irrelevant to the rest of the world.

This is what also happens with a spiritual embargo. Due to the spiritual restrictions on an individual destiny and blessings, which they for the most part are not aware of. Their way of life, living and most of all their way of thinking becomes very much out dated and irrelevant. Again, as a comparison, If you were to visit the nation Island of Cuba right now you would quickly discover that well over ninety five percent of their vehicles are from the 1950’s. To add to this, Cuba have some of the best Doctor’s in the world, nevertheless, their monthly salaries are no more than about $300-$500. When comparing this same scenario with a person that is oppressed by a spiritual embargo. This person, refuse to update their clothing, they would drive a vehicle that is 30 years old while spending thousands of dollars repairing it as opposed to just purchasing a more up to date vehicle. Their thinking and decision making becomes archaic. This person is so spiritually bound that they can not see the obvious non-progress in their lives even though it is obvious to the rest of the world.

The bottom line is, the purpose of a spiritual embargo on a person’s life is to keep them stuck in a certain period of time and ensuring that they never associate or engage with anyone or anything that would cause or assist them in breaking free from the limitations and restrictions on them. Some of the most noted cases of spiritual embargo are folks that are hoarders. A hoarder is a person that gather stuff over a period of time supposedly for future use. These folks also never dispose of anything that they have but again will store it for future use, until their premises become one big pile of junk. If you were to take a closer look at the life of a hoarder, it is almost as if they are stuck in time, they would avoid purchasing anything new, make due with what they have, pay absolutely no attention to their health their appearance neither the desire to progress in life.

Make no mistake my friend, everything in God’s creation was designed to advance and grow. To add to this, frustration will always be the end result of something or someone not growing, advancing or reaching to the next level or stage during the course of its existence. A spiritual embargo is also designed to hijack that individual’s destiny and replace it with a destiny of backwardness and misery. Spiritual embargoes are so disabling that their victim loses their ability to display every human being common trait of frustration when they are not getting ahead. The reality is, their spiritual bondage in this area has made them immune to frustration. In fact, while you may be frustrated because they are not achieving, they are quite comfortable in their state of backwardness.

Through the manipulation of Satan, Adam and Eve were led into a spiritual embargo that eventually placed them on a destiny of hardship, limitations and misery. The ignoring of God’s simple instructions to not eat from a particular tree pan out for them a rerouting of their destiny.

Who or what have you connected to or with in the past that have placed a spiritual injunction on your life and as a consequence placed a spiritual embargo on your life? What have you been negatively saying or others negatively saying about you that have placed you in this cycle of restrictions and limitations? Well, because spiritual embargoes are spiritual, which means that they are invisible even though their effects are physical you must pray specifically against the spiritual limitations and restrictions this curse has upon your life.

1) Firstly, begin to thank God for opening your spiritual eyes to this covert and conniving evil.

2) Now ask God to dismantle the strongholds that have conditioned and govern your pattern of thinking that has resulted in restrictions and limitations in your finances, relationships etc.

3) Decree and declare, the rejection of Satan and his demonic host and human agents power over your life and all that concerns you. Now, repeat Psalm 138:8 as a replacement in response to unseating the enemies of your destiny.

4) Begin to speak prophetically about the re-calibrating of your God intended destiny. “Father, I thank you for my new life, thank you that you have now connected me with the right people, things and places for the sole purpose of advancing me, in the name of Jesus”.

5) Remind God of his word, which says that he has blotted out the handwriting of ordinance that was against us, which was contrary to us and took it out of the way nailing it to his cross and having spoiled principalities and powers, he made an open show of them openly, triumphing over them in it, Colossians 2:14-15.

6) Ask God to reconstruct your hedge of protection from all spiritual opposition, that was on Job, in Job 1:10.

7) Finally, outfit yourself and all that concerns you at all times with the whole armor of God, which scripture clearly says that once we are attired with it, it will cause us to stand against the wiles of the Devil, Ephesians 6:11,13.

As a side note, as with all my teachings, it is the duty of the one that desires freedom from spiritual opposition to firstly discover the specific root cause of his problem. The specific root cause I can promise you will always be spiritual. However, the effects on the victim will be physical, such as poverty, frustration etc. Once we would have discovered the spirit causing this evil in your life, like in this teaching which are spirits of spiritual embargo. We must then launch an all out assault with the aid of scripture against the specific spirit, inclusive of whatever associating spirits that accompany its presence.

Deliverance for the righteous will always be as a result of the knowledge he exposes himself to, Proverbs 11:9.

Written By: Kevin L A Ewing
kevinewing@coralwave.com
kevinlaewing.blogspot.com
Posted by Kevin Ewing at 1:47 PM Links to this post
Email ThisBlogThis!Share to TwitterShare to FacebookShare to Pinterest
Labels: spiritual warfare
Reactions: