This post is based on an email that was sent and in no way reflects the views and opinions of ''Met'' or Jamaicanmateyangroupie.com. To send in a story send your email to likeacopcar.78@gmail.com
July 3, 2016 9:43 am

Ridicule, joblessness, gloom and dismay mounted on one adversity after another, is how 42-year-old Cherry Gayle has described her life — her only saving grace being the joy of her two daughters.

Gayle and her daughters are affected by a thyroid related condition — Graves’ disease — that caused a physical disfiguration which becomes obvious with bulging eyes and ill-shaped faces. This, she said, especially for her 14-year-old daughter Maria Davidson, is difficult because she suffered many verbal and physical wounds simply because of the way she looks.

But Gayle said that her life changed for the better when a young man who bought patties for her children and herself, later posted a photo of them in a local patty shop on Facebook.

“Is a joy; like is God send him to help us that day but since then, a lot a people coming to help and two of the main ones a Tanice and Sashy,” a gleeful Gayle told the Jamaica Observer. 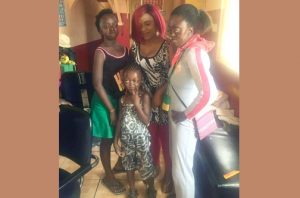 “Sashy and Tanice dem come in like sisters to me and I really love them. Dem is not mi family but is how they make me feel like dem a mi family. Dem put me on Facebook make people reach out to me and dem, carry me to the hairdresser, me and the kids dem and Sashy bring grocery for me sometimes and help me with the children when she can. Overall, them just make me feel good man and mi really appreciate it, me and the children,” Gayle said of the women.
The young ladies Gayle speaks of are local actresses Tanice ‘Peach Hollywood’ Ellis and Sasheeni ‘Sashy Del’ Edwards, who starred in the 2015 play Bashy Bus.

“I met Cherry through Sashy. She said she saw her on Facebook and she felt compelled to help, hearing the story. I, too, became interested because I love giving back as much as I love acting — everybody needs a little help sometimes and that is how it all started,” Ellis said.

Ellis — who is no stranger to helping those in need having established her own charity organisation, Good Deeds, and continues to host various charity activities yearly — said that having met Gayle and pinpointing her areas of need, they recognised that financially they were unable to manage Gayle’s situation alone. However, in the meantime, they were committed to putting smiles on the faces of a family that has been mocked and ridiculed so much that they have lost almost every inch of their self-confidence.

“The stories were hard to listen to. Nobody should have to go through so much, so our first task was for them to realise how beautiful they are and that was made possible through Miss Beverley Hinds, a hairdresser in Spanish Town who did their hair. Sashy finished off their new look by buying them new clothes and we got Cherry a cellular phone. The experience was amazing because seeing them so happy for the first time made me feel so warm inside,” Ellis shared.

Gayle shared stories of how some people have treated them.

“Dem do we bad man. Only Mary, she a mi little daughter,she no go through it because people normally treat her well, but the older one and me dem always a call me names like big eye gyal and toilet rat and it make we feel very bad in ourselves because dem treat we bad,” Gayle said.

“The children and the teachers like me at the school and they play with me and give me food. I like school very much and when I don’t get to go it makes me very sad. Also, when I went to the hairdresser I felt very happy because I got a pretty hairstyle and it made me look pretty. My wish is to get a big cake for my birthday because I have never got one before,” six-year-old Mary Brown told the

Gayle admitted that the abuse that she and her older daughter endures is just one of the thorns in her heel, citing that her hearing impairment is troubling and continues to worsen. But more than anything else, her difficulty in providing for her family, especially with accessing food and crucial educational resources, are among her main challenges.

“Mi no work fi a good while now, but mi used to work hard fi take care of things, but it no so easy again fi me. Mi even used to work a one ackee factory and do like washing and them things but things just slow and I don’t have any help because one of the child father dead and I don’t get any help from the other one, so I always try to work hard for the pickney dem, just that I can’t get anything now but I can’t read, but I know that them can do them work good so I am always trying. Mi brother dem help me out a lot, but I can’t always be looking to him, I don’t feel good about that. But other people will see the situation and help when they can and I am very thankful,” Gayle said.

Ellis and Edwards, having first-hand knowledge of Gayle’s living conditions and immediate needs, have since organised a benefit play, in which Ellis is the main act, to assist Gayle and her children with acquiring needed resources.

“We have since organised a benefit play for Cherry Gayle. I pitched the idea to the management team of a play that I act in called

Single Parents. They have agreed to the show. It will be hosted at the Olympia Crown Hotel in Kingston on July 31. The tickets are $1,000 presold and $1,200 at the gate. For those interested in purchasing tickets for the show I can be reached at 447-8619 or 334-3788. I am begging people to consider this family, they are really in need and remember it could be any of you so please give a helping hand,” Ellis pleaded.

When Gayle learnt of the project she was consumed with joy.

“God answers prayers and there are really good people out there. I didn’t know where the pickney dem uniform or books or anything else will be coming from but now I will be able to buy them and get to pay their school fee and even bank some to help with food and thing for my children. I just want to ask every one to please buy a ticket so I can get some help, please,” Gayle begged.

The children are also to benefit from Ellis’s annual back-to-school treat in August.