This post is based on an email that was sent and in no way reflects the views and opinions of ''Met'' or Jamaicanmateyangroupie.com. To send in a story send your email to likeacopcar.78@gmail.com
July 17, 2016 9:38 am

Mom: Help me save my baby’s life
Sharlene Hinds pleads for support to get her daughter a bone marrow transplant

Jada Johnson wears a broad smiles inspite of the challenges that she faces. (Renae Dixon)

“Help me save my baby’s life,” was the passionate plea of Sharlene Hinds, hours after the Paediatric Ward at the St Ann’s Bay Regional Hospital hosted a birthday party for Jada Johnson.

Jada, who celebrated her fourth birthday on Friday, has been battling leukaemia for over two years. She was diagnosed with the disease after displaying symptoms of the Chikungunya disease.

After receiving treatment, Jada made significant improvement. However, earlier this year, things took a turn for the worst. Jada has been hospitalised for the past three months after it was revealed that she requires a bone marrow transplant

And Hinds would give anything for her daughter to have that bone marrow transplant. 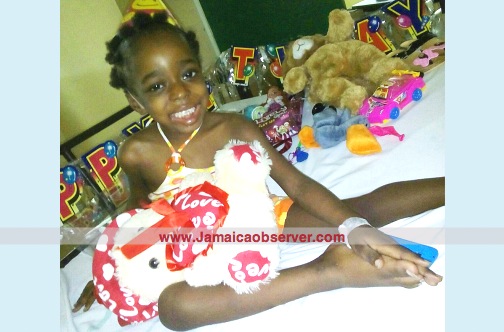 “If it even means that I don’t have food after,” she said, emphasising her desperation caused by her inability to afford the transplantt.

Jada has been diagnosed with Myelofibrosis. Hinds explained that her daughter’s body is not producing the blood needed and that her platelets are low.

“She has to get blood every two days,” Hinds said.

It will cost approximately US$1 million for Jada to get the treatment that she needs.

“When mi hear the price, mi bawl because mi know mi never see half of that yet,” Hinds said. The mother said she has been praying night and day that her daughter will get help.

Hinds said she has not left her daughter’s side at the St Ann’s Bay Regional Hospital.

“When she a feel the pain. Mi want to be here to rub it,” she said.

Hinds said doing the bone marrow transplant is now the only option for her daughter.

“Medication can’t help her because the bone marrow damage. Her blood keep going down. Mi a plea to the Minister of Health Dr Christopher Tufton or corporate Jamaica or anyone who can to come to Jada’s assistance,” Hinds continued.

Hinds, who is from Orange Hill in Brown’s Town, said that her daughter has a strong fighting spirit.

“She a fight from we find out is cancer. Mi a plea to the people dem who can help because she really a fight. She deserves life,” an emotional Hinds added.

Hinds said that when Jada showed improvement earlier this year, she had planned to send her to school. However, that hope has now been dashed.

“Same as mi plan to send her to school September, she was looking forward to it because mi tell her she going to school,” Hinds said.

The Jamaica Observer carried a story last December in which Hinds, who was struggling to make the regular trips from St Ann to Kingston for Jada to get treatment, had appealed for help. However, none was forthcoming.

She also stated that doctors at the St Ann’s Bay Hospital tried to reach out to organisations overseas, without success.

“It is very urgent; she should have done it already because her body is deteriorating,” Hinds stated.

She said that she has been told that persons were collecting money on her behalf. However, she has not received any of that money.