This post is based on an email that was sent and in no way reflects the views and opinions of ''Met'' or Jamaicanmateyangroupie.com. To send in a story send your email to likeacopcar.78@gmail.com
January 10, 2016 9:21 am

HELP! SHE HAS RENAL FAILURE

A few years ago, Doreen Malcolm, 38, operated a shop and lived a simple life worrying about the welfare of her child and getting through what each day presented.

Now, the resident of Denham Town, affectionately called Kizzy, has to contend with battling for her life and bearing the high cost of treatment for end-stage renal failure.

Last week, when the Jamaica Observer spoke to Malcolm’s cousin Valrie Cowan, and on the brink of tears, she expressed that Malcolm is in need of dialysis three times per week; however, she’s unable to get on to the Kingston Public Hospital’s clinic programme until five years’ time.

Subsequently, the family has been slapped with a medical bill exceeding $25,000 per week to get Malcolm the treatment she needs.

“ I called around and the most affordable place is St Joseph’s Hospital and that is $8,500 each time she does dialysis, plus there’s an injection each time that is roughly $3,200 and taxi fare to get her for the treatment and get her back home,” Cowan said.
She added that things are difficult to the point where she has had to bargain with the doctor to reduce the frequency of dialysis, but her condition has not improved, so the bargain will not last much longer.

“He agreed on the basis that if her condition improves she could do it only twice. But even recently she was back in the hospital for a few days and last year she was admitted for seven weeks, and she was confused and tearing down the IV drips,” Cowan explained. “Sometimes she’s bloated and after dialysis she comes down, but as soon as she’s off the machine the doctors explained that the toxins begin to build back up and the bloating returns.” 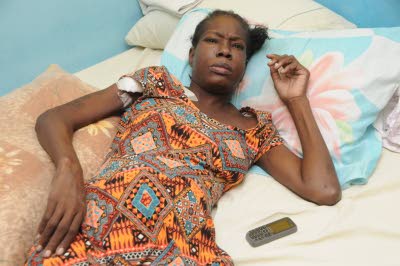 Cowan added that she has reached out to Malcolm’s member of parliament, but received an unfavourable response.

“I sent a letter to the office, but I never realised it was closed for the holiday. From I’ve been talking to persons about Doreen’s condition it’s the first someone has spoken to me in such an arrogant manner. The person who answered said: “Don’t you know I’m on holiday now and the office is closed.” I asked if I could call back and he responded saying, ‘no, I can’t help you. I’m at a luncheon, and as a matter of fact, don’t call back this phone,’ Cowan shared.

She added that since her cousin’s health deteriorated, many have offered a kind word and has encouraged her to keep faith, but that response has made her a bit discouraged.

Moreover, she said even though her back is against the wall and the family is strapped for cash, they are hopeful that they’ll receive help and possibly a miracle.

“We’re thinking about a kidney transplant, but we have not got around to discussing it with the doctors. What we’re tyrying to do now is have her get the dialysis. We can’t afford it and we’re appealing for help. I’m calling around to churches and community organisations to see how best we can fight this renal failure and champion it until God calls her home. We still believe in miracles and until the day God calls her home we’ll try,” Cowan said.

Malcolm, who had little to say, also appealed for help to assist the family with her medical bills and said any form of assistance would be appreciated as her relatives are on their last dollar trying to save her life.

To give assistance to Malcolm, deposits can be made to the St Joseph’s Hospital’s NCB Cross Roads branch, account number 231 052 186.