This post is based on an email that was sent and in no way reflects the views and opinions of ''Met'' or Jamaicanmateyangroupie.com. To send in a story send your email to likeacopcar.78@gmail.com
January 4, 2016 8:38 am

31 YO WITH 8 CHILDREN ASKS FOR HELP

Families of up to nine people are forced to survive on less than $300 a day in some inner-city communities, a Jamaica Observer probe has shown.

These families are usually led by a lone adult woman — in most cases the mother.

Information unearthed by the Observer found that in most cases the single mothers, who are left to struggle to make ends meet, receive little or no help from the fathers of these children.

Mothers who were interviewed claimed that when the sperm donors are approached to assist the children their response is that they have to be offered sex before they make any monetary contribution.

The revelation comes several months after a recent United Nations report, showed that although Jamaica has made notable progress in poverty reduction, the island still struggles with a significant poverty problem, especially concentrated in rural areas.
Last week, the series of investigations conducted by the Observer in sections of Kingston and St Andrew showed some of the grim challenges being faced by those stricken by elements of poverty.

In one community close to Three Miles in South West St Andrew, one mother told a story of how, at age 31, she has eight children and was forced to beg or do odd jobs on a daily basis to make ends meet. 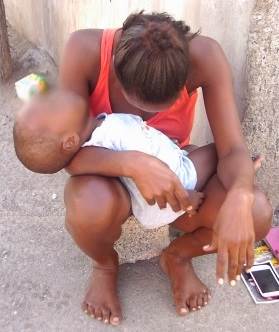 “Sir, to tell you the truth, things rough so ‘till sometimes me feel like me want to give up,” the woman said. She made the comment as she sat on the sidewalk in the tough inner-city community, with her one-year-old baby in her hand.

Hungry, tired and frustrated, the lactating mother said that she could not remember the last time she had a cooked meal.

The state of the woman was so severe that she could hardly provide proper nutrition for the child in her hand who, after crying for hours, had fallen asleep.

But trying to find food for herself, the child in her hand, and her unborn baby were just part of the woman’s worry as she made the startling revelation that she had left six other children at home in her one-room house made of wood.

Unemployed and left alone to fend for herself and her children, the woman said that it has been years since she last saw any of the six fathers of the children.

After making the revelation she paused to beg a passer-by $100.

“Buy me a drink nuh, please, Sir,” the woman called out to a man who walked past her while she sat on a stone on the sidewalk.

She quickly accepted the funds as the man handed her the crushed up paper note.

As the man walked away she explained to the Observer how the drink she will purchase will be used to feed all of her children who were waiting for her in the structure that she said was infested by rats as big as adult cats. The rats, she joked, sometimes behaved like security officers, standing guard outside the house. 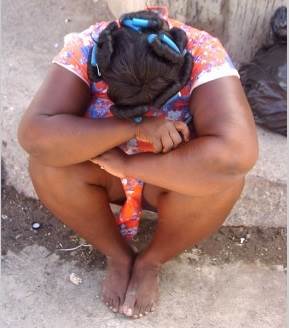 “Sir, me not going tell you no lie, this is my situation … when me buy the drinks all a me children get a taste, that’s the best I can do at times,” she stated.

Close to where that woman told her story, her friend, who is 30 years old, shared similar sentiments.

“Well, she have eight and me have seven and is true she talking… this really rough,” said the other mother.

The second mother told her story of how as a diabetic, her situation was so bad that it has been months since she managed to purchase medication for herself.

“Things so bad every time me raise a money me have to buy something for my children,” said the woman who asked not be named because she was too embarrassed.

Scorned and criticised by family and friends alike, the woman said she has faced it all.

“Yes, people will cuss and say why we make wi self reach in this situation but when yuh reach a stage where you have to struggle to make ends meet, things happen,” she said as she stared at the ground while struggling to hold back tears.

“Is years me a look work and get turn down so many times. Sometimes me get so desperate a sell me have to sell me body,” she revealed.

“When you reach a stage where when you contact the fathers of your children for maintenance money and they tell you that you have to have sex with them it’s hard,” said the woman.

The two women said that some days all they could raise was less than $300 and that was what they would use to cater to their children.

In another nearby Kingston community, another mother who asked that her identity be withheld, gave a tale of how, at 27 years old, she was also struggling to take care of her five children.

“We just asking for some help. We know we make mistake but what we going do? It happen already, at least me never throw way me belly,” she said.

“People will cuss and people will talk but I am already in the situation and I am looking a way out,” added the mother who said she feared giving her name as it could result in authorities taking away her children.

“You see in Jamaica, the authorities just react instead of trying to help you. If yuh tell yuh story all dat will happen is people come attack you,” she said.

The affected mothers are hoping that the new year will bring new beginnings.