This post is based on an email that was sent and in no way reflects the views and opinions of ''Met'' or Jamaicanmateyangroupie.com. To send in a story send your email to likeacopcar.78@gmail.com
October 11, 2016 7:00 am 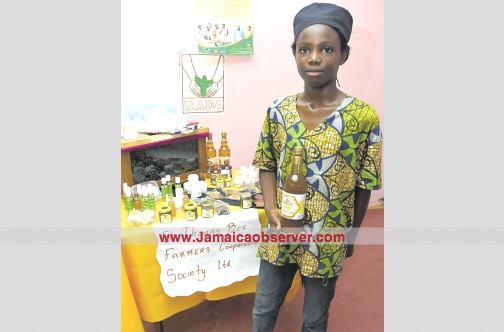 Twelve-year-old Steven McNish displays a bottle of honey wine alongside other value-added products made from honey. (Photo: Naphtali Junior)

Steven McNish is just 12 years old, but already he’s steeped in the art of beekeeping, having learnt from his father who owns and operates Macka Bee Enterprises in St Thomas.

According to the young beekeeper, his father started the company about five years ago.

“The Macka Bee Enterprises was started by my father; now I, as a young one, am learning and I must continue because once one dies, that doesn’t mean seh the whole business must die. He’s not dead, but if he goes to foreign or something, the business is not to just be standing there but moving upwards,” Steven stated.

The youngster explained that the family-run business owns and operates a certified facility that produces honey by-products.

“This is what we do, we make body butter, which is good for a lot of things like eczema, liver spots and acne,” he said. “The ingredients are some oils and a lot of nutritious things, one of them being beeswax.”

Steven explained that another of the company’s products is cream honey – a special blend of the sweet food that gives consumers a different taste from what he described as “plain honey”.

According to the youngster, the company also collects honeycomb, places it in jars of honey and sells them. That, he said, helps to introduce honeycomb to customers who may have heard about it but had never seen it before.

Honeycombs are masses of hexagonal wax cells built by bees in their nests to contain their larvae and stores of honey and pollen. Beekeepers, while harvesting honey, sometimes remove the entire honeycomb.

The March 2004 issue of Experimental Biology and Medicine reported that the fatty alcohols that honeycomb is made of appear to significantly lower bad cholesterol and increase good cholesterol.

“In humans, clinical data in one study showed honeycomb fatty acids and alcohols lowered low-density lipoprotein by 21 to 29 per cent,” according to an article posted onLivestrong.com.

The article also said that the alcohols found in honeycomb appear to have antioxidant effects that help protect the liver.

“To test this, researchers conducted a study using a mixture of beeswax alcohol to evaluate the safety and effectiveness in people with fatty liver. Participants took a preparation of beeswax alcohol for 24 weeks, and at the end of the study researchers found that it helped normalise liver function and improve symptoms of fatty liver. The study was published in the July 2013 issue of theKorean Journal of Internal Medicine,” the article added.

“We put it in a jar with honey and call it chunk honey and sell that, so now people are introduced to the honeycomb and can say ‘Oh, that’s how it looks’,” Steven said.

The company, he said, also produces body oils as well as honey wine which, in addition to honey, contains ‘royal jelly’, which is what is fed to the queen bee. The home-schooled youngster added that they also make rose floating candles that, while not products from the beekeeping process, indirectly help to keep production going.

The candles, he said, clean the air, acting as a counter to parabens – regarded as the most widely used preservatives in personal care products – that, according to Steven “mess up the air”.

“So… the cleaner the air, the better for the bees and the environment,” he said.

The youngster has also commended his father for designing and constructing an environmentally friendly solar machine that is used for the manufacture of their sun-dried mango and sun dried bird pepper products.

He added that his father has also been working with other beekeepers to grow the industry within the parish.

“My father is the chairman for the St Thomas Bee Farmers’ Co-operative Limited and he has been teaching [for] a lot of years. It’s about training young people about beekeeping and what we do while training the children to do beekeeping,” he said.

“We also teach them how to use beekeeping not only just to sell pollen or honey, but to use it and make value-added products. We are growing slowly and surely as a plant. We can’t bear fruit yet, but we can blossom,” the youngster said.