This post is based on an email that was sent and in no way reflects the views and opinions of ''Met'' or Jamaicanmateyangroupie.com. To send in a story send your email to likeacopcar.78@gmail.com
October 16, 2016 10:23 am

FROM POVERTY TO POSPERITY FI TRUE

“You can be anything you want to,” Wenford Patrick Simpson told students at the Marcus Garvey Technical High School in St Ann recently. Simpson, a successful chef residing in the United States who overcame poverty to accomplish his dream, was qualified to make that statement to those who now attend his alma mater.

Simpson, the corporate executive chef for BB King Blues Club and Grill, revealed in an interview with the Jamaica Observer that he had a difficult childhood, but always knew he wanted to become a successful chef. Today, he is not only a successful chef with his own cooking show, but Chef Simpson has his own product line and is in the process of putting out his own cookbook. This successful chef is also looking to write his autobiography and to even expand his product line. 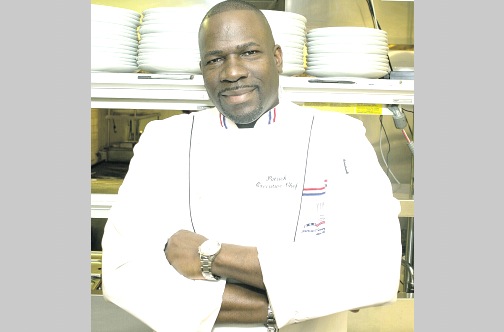 “Don’t matter how rough it is, as long as you stay motivated you can make it,” Simpson said.

He pointed out to the students that poverty plagued his childhood. He grew up in a single-parent household and his mother was not always able to provide the finest things for her children. However, from an early age he told a teacher that he wanted to become a chef and he has accomplished that dream.

“She said, ‘Patrick you can be anything you want to be,’” he recalled.

“I remember when I use to come to school and didn’t have any lunch money,” Simpson shared, revealing that it was often Jimmy, a vendor who sells by the school gate, who gave him a meal.

“As a student it was tough because you come to school without lunch; you don’t know if you are going back home to dinner,” he said.

Simpson believes it was his often lack of food which made him want to become a chef.

“I want to make food to fill people because I remember there was a time when I was not filled,” he added.

He stated that seeing people enjoy a meal that he created brings him great satisfaction.

“I love cooking; it’s a great feeling when I watch someone enjoy something that I make,” he said.

Simpson, who is highly regarded as being creative in the kitchen, believes that that creativity was nurtured as a result of him not always having all the ingredients readily available to prepare a meal while growing up.

“I remember when I use to look after my little sister and I had to prepare something for her to eat, but there was nothing in the house and I had to make stuff from stuff,” Simpson said.

Being back at Marcus Garvey Technical High School was an emotional moment for Simpson.

“It was kind of emotional. It gives me flashbacks,” he said of the institution from which he graduated in 1989.

“I see myself in so many of these kids; so many of these boys don’t know what they want to do with their lives,” he said, adding that he was happy to do anything that will provide guidance to the students using his own life experiences.

Simpson was born in May Pen, Clarendon, and came to live in St Ann on one of his mother’s frequent moves.

Simpson, who did his internship at the Club Caribbean hotel, was employed by the resort immediately after high school. Over the years he has grown in the hospitality industry, moving from the cruise ship industry, working in a number of Jamaican hotels and operating his own business to become a renowned chef in the United States.

His success includes his own product line, Simpson’s Foods, which produces jerk seasoning, jerk sauce, chutney, pickles, and snacks. Simpson, who hosts a cooking show on Tempo network, said that although poverty impacted his life, he never doubted that he would have accomplished his dreams.

“I set the dream in my head that I want to be this. There was no doubt in my mind; it was how long, but with the drive I have I knew it was going to come one day,” he said.

“I told myself I want to be successful,” he recalled.

Simpson, who has cooked for many celebrities, said he has dreamt of opening his own school and having his own cookware line.

“Anything I put my mind to I normally deliver,” was his parting shot.