This post is based on an email that was sent and in no way reflects the views and opinions of ''Met'' or Jamaicanmateyangroupie.com. To send in a story send your email to [email protected]
January 18, 2016 6:02 pm 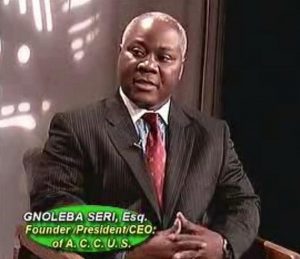 An immigration lawyer has been arrested in New York for defrauding immigrants, including Caribbean nationals, the United States Citizenship and Immigration Services (USCIS) says.

Gnoleba Seri of Brooklyn, New York has been charged for immigration fraud and aggravated identity theft, according to the agency.

It says Seri allegedly used his legal knowledge to circumvent the law and forge documents that are critical to obtaining an immigrant visa.

According to the complaint unsealed on Friday in Manhattan federal court, between October 2012 and April 2015, Seri, a licensed immigration attorney working in Manhattan and Brooklyn, “engaged in a scheme to use personal information contained in legitimate immigration documents for fraudulent purposes.”

In his role as an immigration attorney, Seri submitted falsified and forged I-864 Forms, affidavits of support for those seeking immigrant visas, in support of his clients’ applications for immigration visas and for legal permanent resident status, the complaint said.

It said that the 40-year-old attorney would receive legitimate I-864 Forms, tax information, pay stubs, and W-2 forms from individuals sponsoring his clients, and then fraudulently submit these documents in applications for other clients.

“That is, Seri submitted I-864 Forms that listed individuals as financial sponsors who had never met the people they were purportedly agreeing to sponsor,” said USCIS, adding that those I-864 Forms included the sponsors’ real names, identifying information and financial information, as well as forged signatures.

“These fraudulent and forged I-864 Forms all listed Seri as the preparer, and many of them were notarized by him,” USCIS said.

Acting Special-Agent-in-Charge of the New York Office of US Immigration and Customs Enforcement’s (ICE), Homeland Security Investigations (HSI), Glenn Sorge, said that Seri allegedly “abused the special trust bestowed upon him as an immigration attorney to commit fraud and identity theft.

“When individuals falsify immigration documents, the system is severely undermined, and the security of our nation is put at risk,” he said. “HSI is committed to working with its law enforcement partners to ensure fraudsters are identified and brought to justice.”