This post is based on an email that was sent and in no way reflects the views and opinions of ''Met'' or Jamaicanmateyangroupie.com. To send in a story send your email to [email protected]
December 29, 2017 8:00 am

Gm fb I must say I’m not a fan of mix up/drama & all them other typa shxt & I don’t normally do this but this girl by the name of Michaela Stewart stole my shxt. Anyways said I wouldn’t/wasn’t gonna put her on blast but she deserves to with all that mouth talk bcz I msged her calmly about my shxt but she decide fi gi big chat.
Anyways my mom gave her some stuffs to take down for me & pay her 100 USD just to take them & this girl went into my bag & stole my shxts. I called her the day after I went to collect them & asked her about them cz I saw that some of my stuffs were missing. This girl out of guilt.. the first thing she said was “mi nuh guh inna yuh bag & my mom made sure to take pictures of all that she bought & sent them to me. 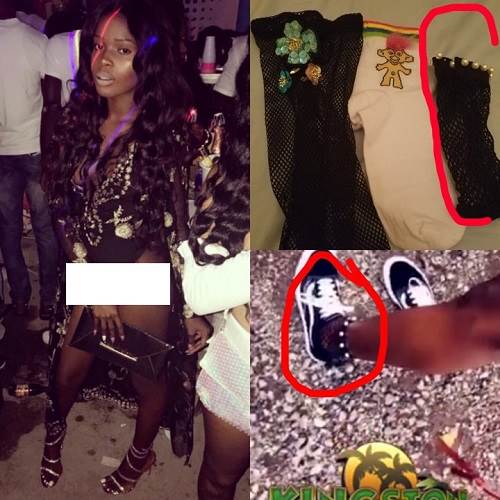 Now dis likkle long eye teefing gyal a go hype up har self over mi tings an a go tell mi madda bout if a she alone can buy tings online 🙄🤔🤔 then b*tch how Tf I receive everything else but didn’t receive the mesh socks along with the other shxt that you took??! Yuh tek god off a d cross seh yuh neva guh inna d bag but yet when I asked yuh seh yaa go look if u see dem 🙄 nw tell mi, if u neva guh inna d bag as u claim hw d hell yaa go look! 🤔
Couple days after now my mother saw d bitch posted a vid on fb wearing my mesh socks with the pearls around them & ave d audacity fi a video it to. Now when my mother confronted her abt it d girl a go seh a buy she buy it 😂 suh mi madda ask r weh she buy it she cyaa ansa and my mom bought them online it wasn’t a store she walked into and pick them up, an d gyal a go gi mi tuff chat over mi tingz weh she teef & den block mi 4rm WhatsApp. Not like she carry dem fi free enuh 😕 mi madda affi pay di drancro & she went and stole my shxt. Yo I hate thieves!! I see you can’t do better cause u is a old ghetto rat!! An unno badmind!!! But I don’t need them back Ms Michaela I hope it made you a better person yer! If only yuh did ask or seh yuh like dem my mom would’ve surly bought you a pair. You can keep them along with the other shxt that you too